Where do our emissions come from?

Australians make up 0.3% of the world’s population yet we produce five times more climate pollution per person than the global average. Territorians emit more than twice as much climate pollution per person than any other Territory or state in Australia. The majority of these emissions are from two sources: land use and the energy sector, especially gas. 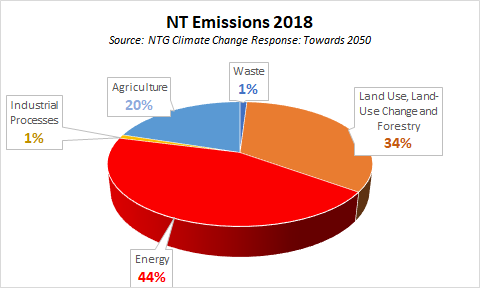 The Northern Territory has a long history of fossil fuel driven development and resource extraction. As a result, we have unnecessarily high carbon emissions and government dependence on out-moded and out-dated thinking and infrastructure in the energy sector.

The NT has never produced coal or oil in commercially viable quantities. There are enormous reserves of gas in the central and Barkly regions of the Territory however, and Darwin is the closest port to large reserves lying off Australia’s northern coast. The relationship between the gas industry and NT politicians is extremely close.

Gas industry supporters point to the enormous Ichthys LNG processing facility in Darwin as an example of what gas can do for the Territory. The facility is the largest of its kind in the southern hemisphere. During 2010-2020, its development caused a property boom and bust in Darwin from which our city is still recovering.

While the NT economy contracts, the NT’s gas exports increased by 111% during 2018-19 (along with large increases in our carbon emissions) thanks to Ichthys, yet the project pays no revenue to the federal government via its Petroleum Resource Rent Tax (PRRT).

Since the Ichthys fiasco, subsequent Territory governments have been seduced by new gas industry promises of a financial stimulus from fracking. While the Pepper Inquiry and then exploration have dragged on against massive public opposition, the fracking industry has shown itself to be unprofitable, damaging to other industries, and highly polluting. The largest fracking companies in the world are going bankrupt.

Still the NTG is working with the gas industry to turn the Territory into a national ‘Gas Hub’: a plan that has no benefits over the renewables-based RepowerNT vision but would inflict significant negative social and environmental and economic impacts on the NT for generations to come.

LNG gas and diesel-fuelled electricity generation and LNG exports from Inpex account for approximately 40% of NT emissions. If the NT Government continues to prioritise fracking and the export of LNG over renewable energy, Territory emissions will blow out Australia’s hopes of meeting its Paris Target and will remain among the highest per person in the world.

Listen to a background briefing here: How fracking could threaten Australia’s Paris target

Land use & land use change (LULUC)

With a large land mass and a small human population, the way land is used has a major impact on the Territory’s emissions.